A Tool for Ensuring Our Rats Are Healthy 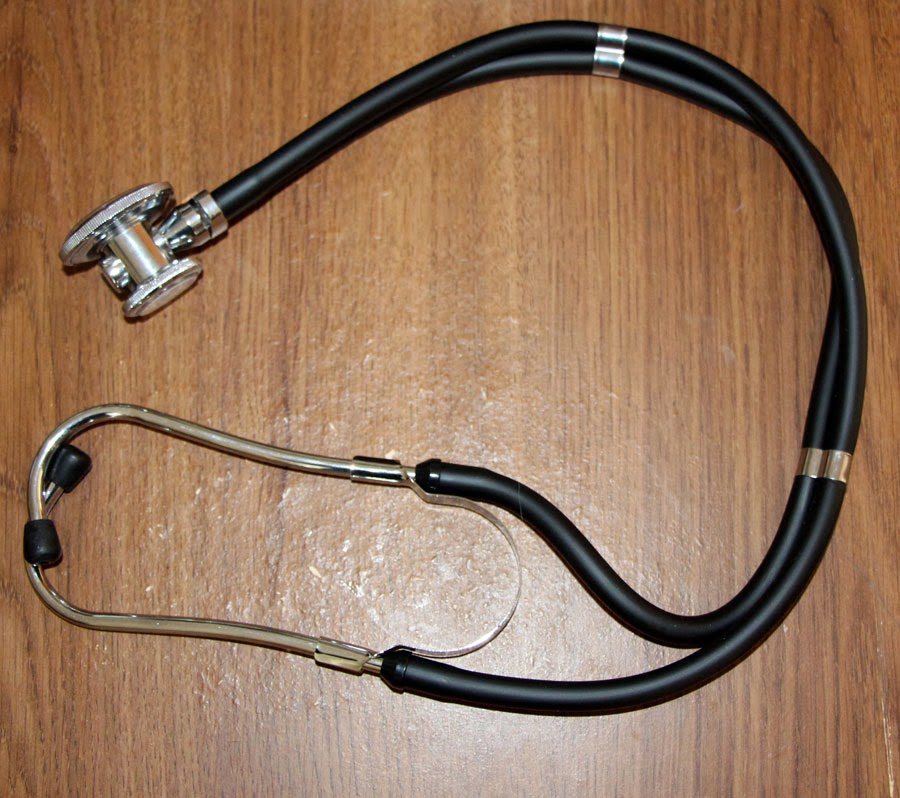 I ordered this stethoscope and received it from Amazon a few days ago. It is a new tool in my rat arsenal. If you have ever heard of "telephoning" your rat, it is my hope that this tool will make that job easier.

It might seem like kind of an odd thing to get for the rats. After all, I am not doctor and I don't try to be one. When our rats get sick, it is into the vet they go. But sometimes, when symptoms are mild, they are difficult to notice. And sometimes, you might notice a sneeze and wonder if it is just a sneeze or if there is something else going on.

One of the techniques we use to try to figure this out is "telephoning" our rats. This is just a cute term for holding their chests up to our ear like a telephone and listening for any unusual lung sounds. I've never been very good at this - especially if you have a squirmy rat who doesn't want to play telephone. So I figured a stethoscope may be a better option.

Please be clear that I am not recommending trying to diagnose and treat your animals yourself. I have always believed that if there is something wrong, a vet is the best person to diagnose it. A vet can prescribe the best antibiotic for the particular problem. A vet can assess progress and whether or not treatment should be changed - dosages increased or medications switched. A vet will ensure that dosages are calculated properly based on the weight of your rat and the severity of illness.

Instead, I am just advocating a technique for detecting problems earlier than you might otherwise. Early detection often means it is easier to treat and there may be less long-term damage done. Early detection is always a good thing. When I worked with birds, early detection was essential. Birds are even better at hiding illness than are rats - especially small prey birds like finches. There is a saying that a sick finch is a dead finch. This is often true, because by the time they are showing symptoms, there is often little a vet can do. The illness has progressed too far and treatment is often unsuccessful. With finches, I had to invest in a microscope and learn to do my own fecal smears. Most finch illnesses that are treatable are related to the digestive process - parasites, bacteria, yeast - and are therefore detectable in fecal smears before the birds show any symptoms. When I could find the problem via fecal smear before severe symptoms showed up, they could often be treated very easily. Rats don't suffer from gastrointestinal problems as often as birds do, but they do suffer from respiratory problems quite often. So instead of a microscope, a stethoscope is called for.

Of course, I don't know yet what exactly to listen for. So this is a learning process. I figure the best way to start is to periodically listen to the rats while they are healthy. If I am familiar with what a healthy rat sounds like, then I will be more likely to recognize something that it abnormal. I am guessing that a lower respiratory infection (one that involves the lungs rather than just the sinuses) will be a bit obvious if I know what normal sounds like.

When picking out a stethoscope, I wanted something inexpensive but that has good sound. I picked out this Omron Sprague Rappaport Stethoscope for a few reasons. First, it was inexpensive. I am not going to be using it every day for several hours, so I don't need the top of the line in medical diagnostic equipment. It is just for hobby use. Second, the reviews claim it has good sound. Many complained that it is uncomfortable to wear for long periods of time, but since I won't be wearing them all the time, I can put up with a little discomfort. Third, it had a pediatric bell (along with an adult bell). A pediatric bell is smaller and more suited to small animals. There is even an infant bell included with the accessories, although I have not yet investigated what all these accessories do or how they work.

Hopefully, with the help of this new tool, I will be able to stay on top of respiratory infections and catch them sooner, so our rats will stay healthier.
Posted by Ratropolis at 9:16 AM