Jeremy, Hammie, and BoBo - Rescued from a Hoarding Situation

There have been a few hoarding situations recently that have resulted in rescues being overwhelmed with ratties needing new homes. One of those cases was in Millersville, MD, where over 100 rats were crammed into two small Guinea pig cages.

Dakota's Dream rescue in Virginia and Small Angels rescue in Maryland have stepped in to help find homes for these animals. The boys have gone to Dakota's Dream and the girls, to Small Angels. Both rescues will be looking for good homes for these animals and can also use help with vet and care costs. The girls all are being spayed and some of the boys will be needing neuters. Because of the poor conditions at their original home, many of the rats have been scratched and some of the wounds have advanced to become abscesses.

For more information about how to adopt or help these animals, you can review this thread on Goosemoose: http://www.goosemoose.com/rfc/index.php?topic=4105623.0 or check out their Facebook page: https://www.facebook.com/Millersvillerats.

This is not the only hoarding case that has surfaced, however. Another case has been making news in Dayton, Ohio. Rattie Tattie rescue has taken in 116 rats from one apartment where they had been living in deplorable conditions. They are also working on setting up rat trains to transport the rats to surrounding states. More information about that situation can be found on this thread on Goosemoose: http://www.goosemoose.com/rfc/index.php?topic=4105695.0.

After losing Bela and Jo within a day of each other, a few pieces happened to fall into place for us. We were leaving from the Chicago area to the Outer Banks in NC for vacation. We like to avoid the Washington DC traffic, and the alternate route takes us right by Winchester, VA, where Dakota's Dream is based. I contacted one of the volunteers right before leaving. The rats they had at the time had all been adopted, but they were picking up another group of 10. We were able to arrange to pick up three of those boys on our way home from North Carolina. These are the new additions to our mischief: 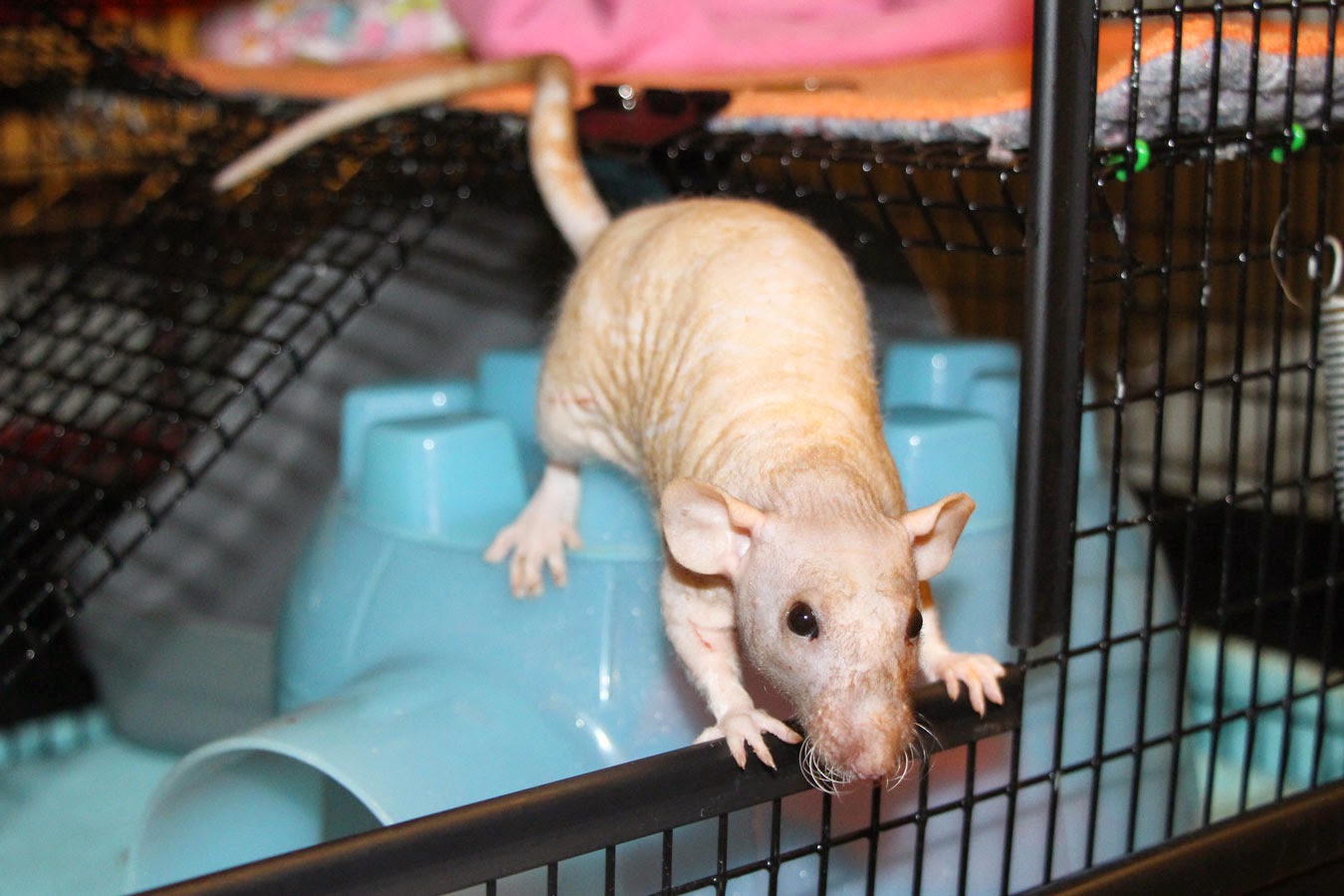 Bobo is a hairless dumbo rat, about 3-4 months old. He was named by my youngest son. I am unsure of the genetic cause of the hairlessness - whether he has the hairless gene or the double rex gene (two rex genes). He has some very short whiskers, so I would normally guess double rex. However, I have not seen any pictures of rex rats coming out of this situation, which I would expect if he was double rex given the number of hairless rats that were coming in. I have no experience with either one and so cannot make the distinction.

Bobo is very sweet. He already crawls right into my arms when I open the cage door. He has some scratches from his past bad experiences and an abscess on his neck below his chin that we will be addressing with the vet. 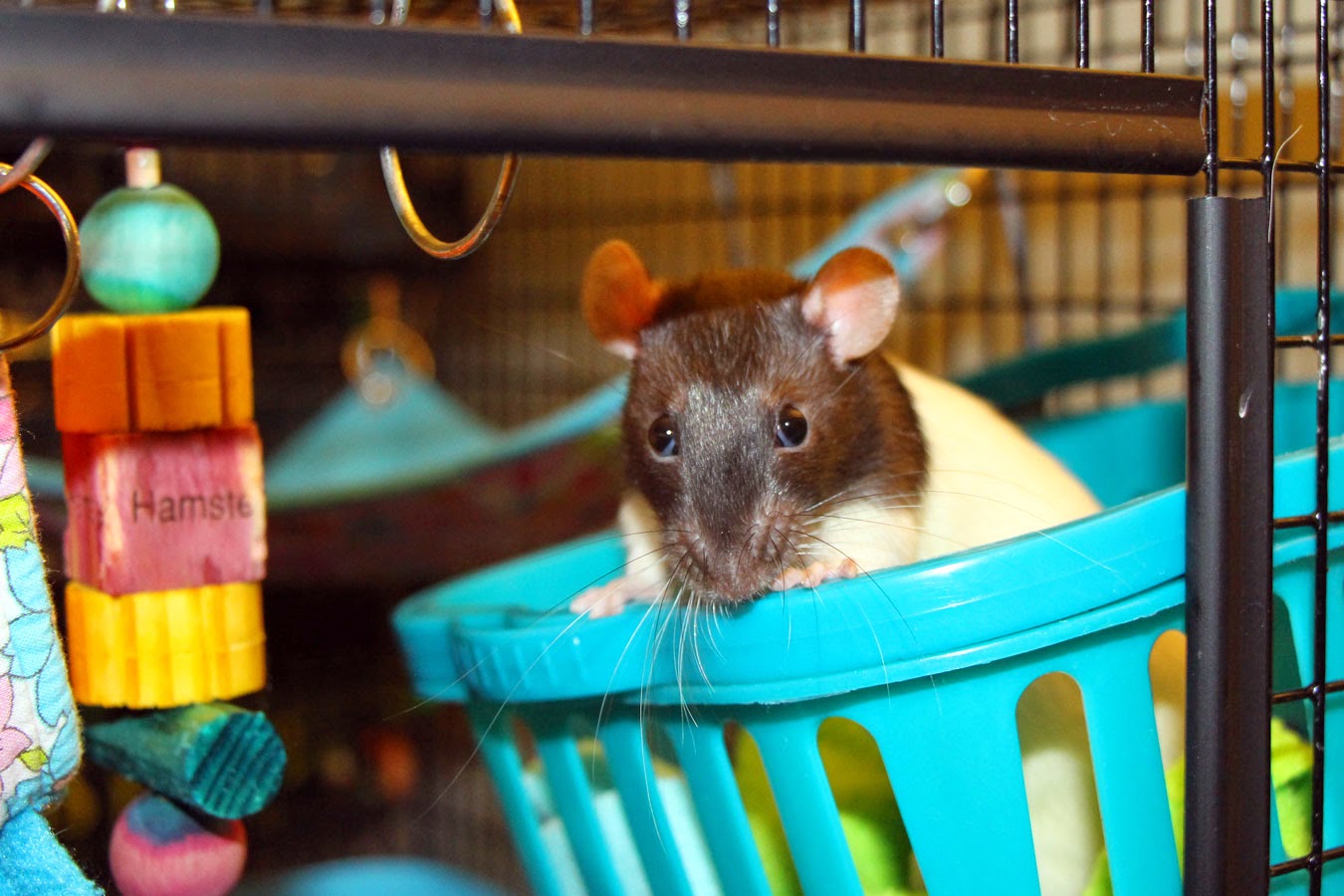 My oldest son requested and named Jeremy. He is the youngest of the group, only 8-9 weeks old. He shies away from the hand at first approach, but comes right back to it if you leave it there. Like Bobo, he is gentle and sweet. He found the space pod in the cage right away and loves to curl up inside. 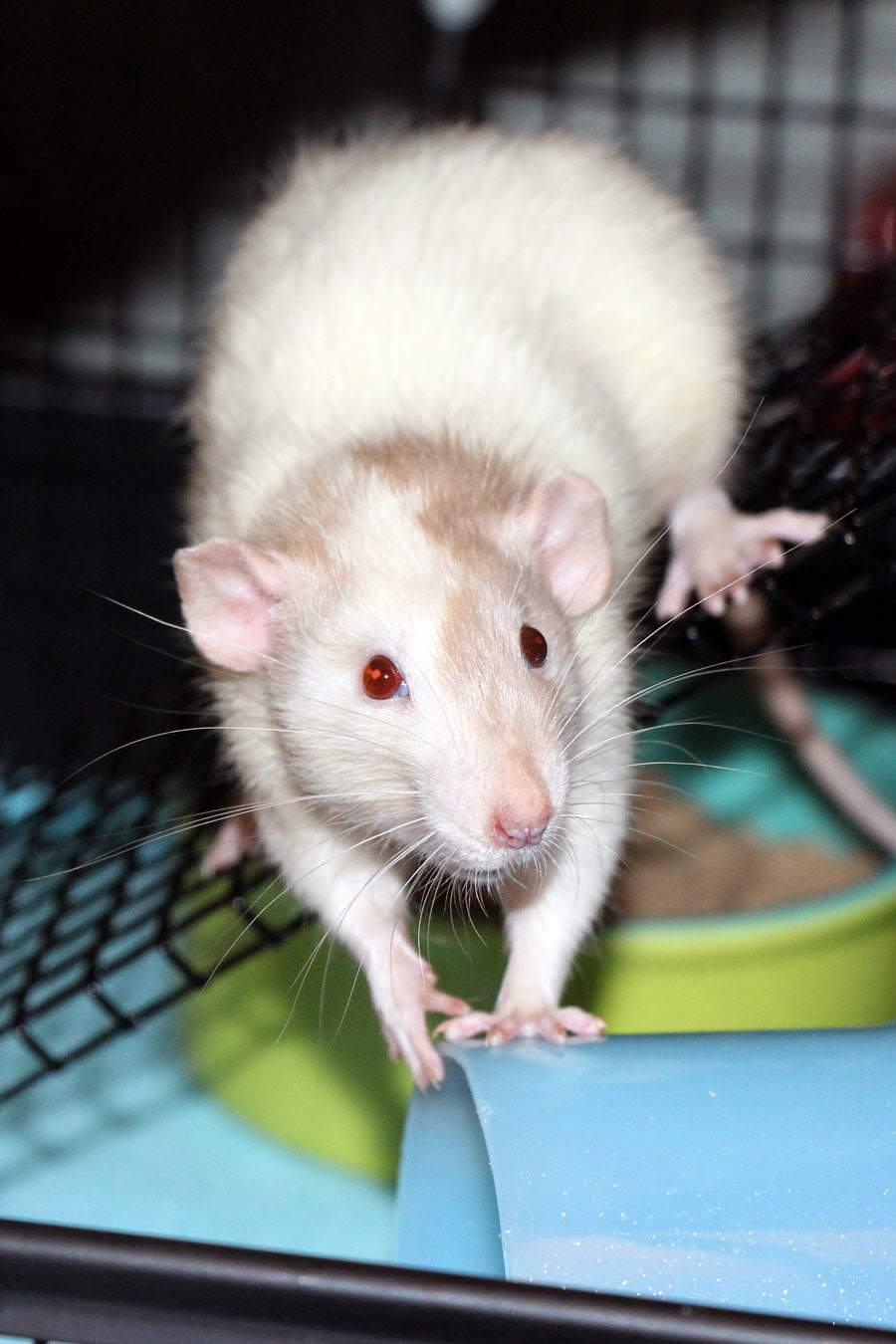 Hammie, like Bobo, is 3-4 months old and a dumbo. He has beige markings, and at least one ruby eye. I am unsure at this time if the other eye is ruby or black. He is very active and inquisitive and comes right to me to see what I am up to (am I bringing him a treat?). He tries to get away from me when I attempt to pick him up, but he really does not seem afraid of me at all - just a little nervous about being picked up.

I was supposed to name him, but while I was working on figuring out the right name to suit him, my kids named him behind my back.

All three rats are in quarantine and living it up in the Martin's R695. I can tell they never had a cage like this - they went nuts when I first moved them in. It must be a huge upgrade from sharing a Guinea pig cage with 50 other rats.

Posted by Ratropolis at 6:29 AM