I frequently see posts asking which is a better cage for rats: the Midwest Critter Nation or the Midwest Ferret Nation.

In most circumstances, my answer to this question would be the Critter Nation. There are only three differences between the cages:

Of course, you can always modify the Ferret Nation with some hardware cloth, but this can be a pain and an eyesore. Still, if you are finding one cheap for sale second-hand, it may be worth it to buy it and modify it as needed.

One benefit of the wider bar spacing is that it is easy to pet your rats between the bars without opening the door to the cage. The 1/2" bar spacing of the Critter Nation is just too narrow to comfortably slip a finger into the cage.

The Critter Nation bars are horizontal. This is an ideal setup for rats, as it makes climbing the cage walls easier. The Ferret Nation bars are vertical and so a little more difficult to climb.

There is actually one other potential difference between the two - but only if buying used. The older Ferret Nation cage used to have a flat shelf/level rather than the ridged pan that they come with today. Some people really love the old style, whereas others like the lip on the new style for keeping raisins and debris inside the cage. Liners designed for the new style may not work on the old style levels and shelves. All Critter Nation cages have always been made in the new style.

Despite my affection for the Critter Nation, the Ferret Nation is still a really good cage. If you have the option to get one or the other, I recommend the Critter Nation. However, if you have the opportunity to get a good deal on the Ferret Nation and are aware of its limitations, it is still a really nice cage and your rats will love it, as long as you make sure they cannot escape from it. 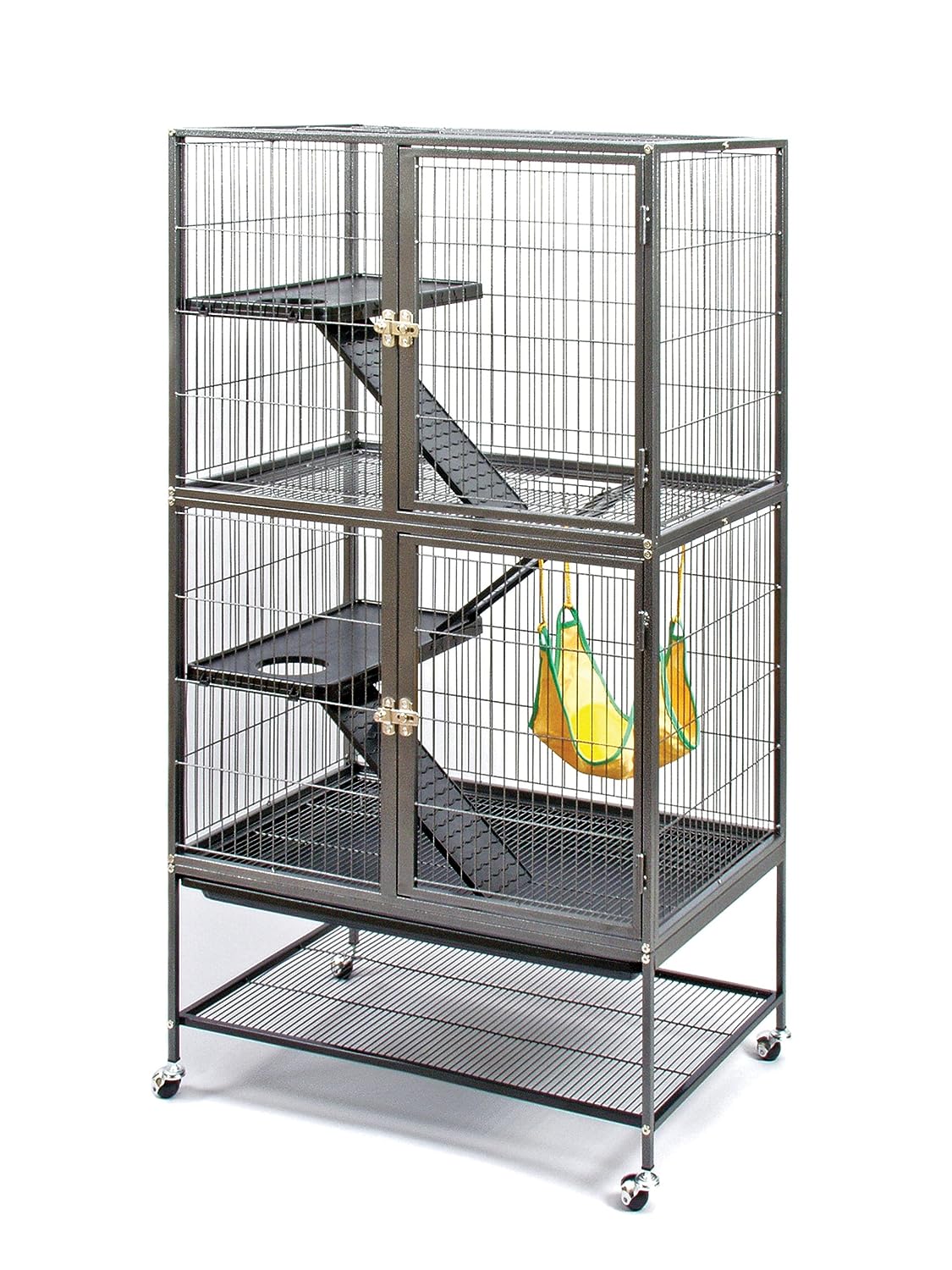 There is another cage that many often confuse with the Ferret Nation. It is the Preview Hendryx Feisty Ferret, pictured to the left.

The Feisty Ferret is similar to the Dual Ferret Nation in that it has two main levels and two shelves. It also has vertical bar spacing that is 7/8" (a little smaller than the Ferret Nation, but significantly wider than the Critter Nation).

The Feisty Ferret looks like it has fully opening doors, like the Ferret Nation and Critter Nation. However, in actuality, only the right hand door opens. The left side is not a door and is permanently closed. This means that cleaning will be a little more difficult.

The Feisty Ferret is also a little smaller than the Ferret Nation. It's shelves are not full 1/2 cage width shelves, like the Ferret Nation, but instead are slimmer and they have a hole cut out. This means that it will not have as much space for accessorizing. The shelf ramps are solid plastic instead of a metal ramp with bar rungs, which I believe are easier for rattie feet to grab on to. Finally, the middle level is not solid, but wire, and will need to be covered for safety reasons.The bottom tray actually slides out (not my favorite setup for rats, but nice for bird cages), which means there is another metal grid above the bottom tray that will need to be covered for safety. Finally, the construction on the Feisty Ferret seems to be weaker than the durable Ferret Nation cage.