﻿
Halloween is almost here and the rat cages are all decked out in spooky style. This week the pattern is full of Jack-o'-lanterns in the cemetery, combined with the new U-Haul furniture pad/fleece liners in shades of orange and black. The new liners are really nice so I am hoping they will do well controlling odor. So far, no chewing, but it is way too early to tell. 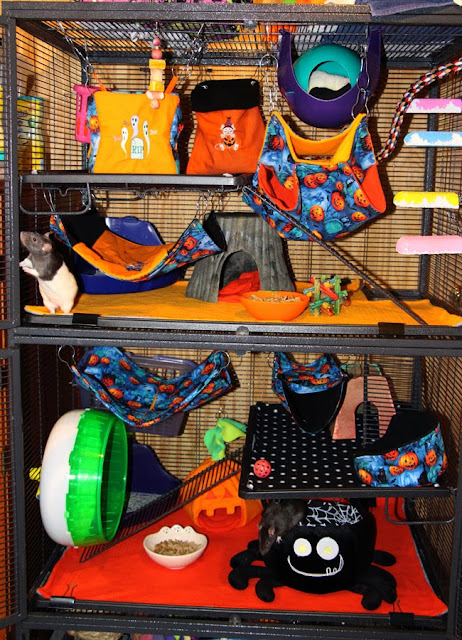 This is the alternate design: a Halloween town pattern with some bats, ghosts, pumpkins, and candy corn for variety. This design is a lot more colorful, pulling in the oranges, purples, greens, and a fluorescent yellow. The picture below was taken a few weeks ago when Pirate was still with us. Seeing him here doing well, it is hard to believe he will go downhill so quickly after this.﻿ 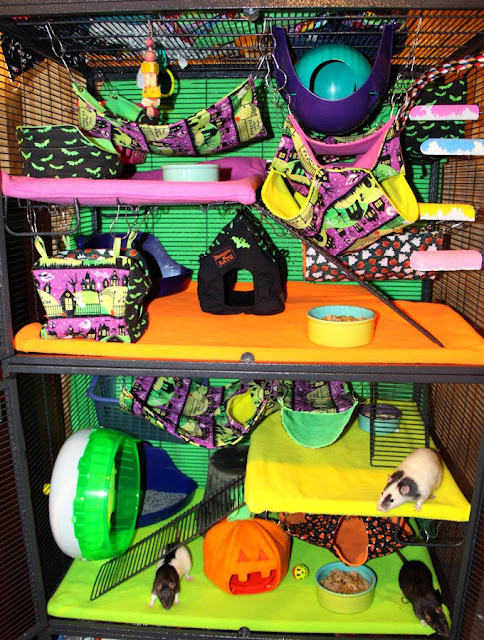 Loki gets Halloween hammocks as well. I've taken out his Zilla liners and put in fleece ones because I previously noticed a little blood coming from his penis area and I want to be able to easily see if he spots any more blood. I suspect he has a urinary tract infection (UTI) in addition to the respiratory infection we are treating him for. Perhaps the UTI is the immune stressor that triggered the respiratory infection. It is possible the UTI was caused by bacteria from his skin infection getting into the urethra. If so, that infection responded to Baytril and he is currently on Baytril for the respiratory infection, so it is possible both infections can be treated with one drug. Since a couple days after starting the Baytril, I haven't seen any more blood and I am hopeful that it is working. He has a recheck with the vet tomorrow, so we will know more at that time.﻿ 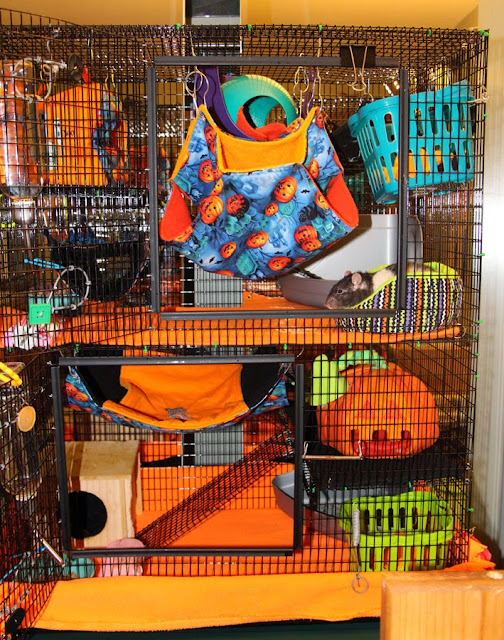 Loki is the only rat who really likes the cuddle cups. In this pic, he is in a cuddle cup from an old hammock set because I didn't finish the new cuddle cup by cage cleaning day. When I went to change out the old cuddle cup with the new one, he quickly snatched the old cup and dragged it into his litter box where he thinks I can't find it. So I let him keep it. Now he has two cuddle cups. I wonder how long it will be before one of them is moved into his cube. He seems to think his house should come complete with a sofa. He is a very particular rat and he doesn't like me messing with his stuff.
Tutorials for making the cuddle cup along with all the other hammocks shown in these pics can be found in the Hammock Tutorial section of the Ratropolis website.﻿

Posted by Ratropolis at 9:42 AM