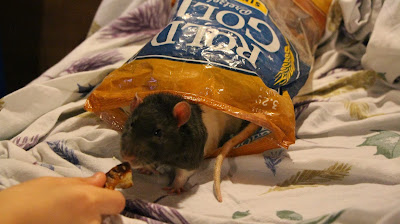 It seems that health problems start popping up at 1 year for me and that at around 1 1/2 years, things step up.

After recovering from an abscess and skin infection, Loki now has a URI. Ironically, he hadn't shown any respiratory symptoms except for the occasional sneeze. He did, however, suffer from a lack of appetite over the last few days. One of my litmus tests for rat health is that a healthy rat should come running to me in the morning to get to his/her breakfast. Loki stopped doing this a few days ago. He hadn't completely stopped eating - he would eventually eat the corn and a few peas - but many peas were left behind in the dish. Leaving broccoli or green beans or even carrots is not unheard of for him, but he never would leave a pea behind when he was well.

He seemed a little less active, but Loki is not a very active rat any more on a normal day. His eyes were not bright and wide like they should be; instead, they were squinty or half opened.

So in to the vet he went. Loki doesn't like the vet much. He doesn't like having his abscess drained - although he has been mighty good about it - he squeaks and cries a bit, but he doesn't bite. And unfortunately for him, the vet rechecked the abscess and found she was able to remove more pus - hopefully it will heal for good this time. He also has another small abscess developing, although it is not yet read to come to a head.

Abscess and lack of appetite aside, Loki had not shown any tell-tale signs of a respiratory infection. Yes, he would sneeze occasionally - but nothing that triggered my URI alert. There was no wheezing or congestion or porphyrin. But as soon as we got to the vet, all of Loki's defense mechanisms failed him, and his respiratory symptoms erupted. Suddenly, his breathing was loud and crackling/congested. I was quite surprised at how those symptoms just suddenly exploded out of nowhere.

Rats are prey animals and as such are great at hiding weakness and illness. Apparently, Loki had been doing double time at covering up his respiratory infection, because I hadn't noticed a thing and I am always on URI alert. At the vet, however, he reached his tipping point and the symptoms were quite obvious.

This is a good lesson for me. We need to use all of our instincts and observational powers to keep our ratties healthy. I knew something was off. He was eating, but not enough. He was even less active than usual. His eyes were not quite right. There was no one thing that screamed URI or any other specific problem, but my instincts were keyed in enough to realize that something was wrong. I think it is important for us to listen to these instincts and get them seen before the more obvious signs surface. The earlier we detect the problem, the easier it will be to treat. 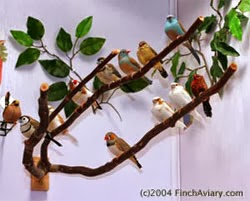 This is actually a lesson I learned from keeping finches. Small birds are also prey animals and they are masters at hiding their symptoms. Finches don't bond to people, so they don't let their guard down ever when people are around and they do everything they can to look healthy until they are near death and can't do it anymore. The old saying is "A Sick Finch is a Dead Finch" and it is both true and false. Finches can be treated with proper diagnosis and medications - but you have to catch it in time. By the time a finch is obviously ill, it is nearly always too late to treat. I learned that I actually had to catch signs of illness by observing the nature of their droppings - and by looking at the droppings under a microscope - diagnosing things like yeast infections, some bacterial infections, protozoal infections, and parasitic infections before the symptoms show up. That was the only way to catch problems in time to treat them. For those who may keep birds and who are interested in learning to do this, I wrote an article on it a few years back: How to Do Your Own Fecal Smears.

Most problems that rats develop, however, are not detected via their feces. This is because they are usually not exposed to parasites via wildlife in outdoor habitats and they don't usually eat live insects, so those types of problems are less common in rats. Intestinal problems are not usually a major concern. Respiratory problems, however, are a dime a dozen. Fortunately, our rats learn to be comfortable around us and they do drop their guard when around us most of the time. We can catch problems in time to treat them. But we have to remember that sometimes we have to look at behavior and other signs that are not as obvious in order to catch problems as early as possible.
Posted by Ratropolis at 9:26 AM