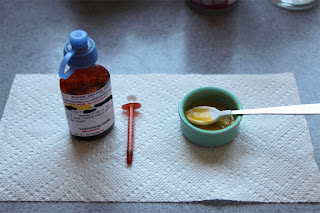 Pirate has recurring respiratory infections. He has been in good health for several months now, not needing medications since before we left on vacation in the beginning of June. However, more recently, has started sounded congested at times - primarily when just waking up or becoming active again. After that, his breathing clears up and he seems fine.

Because this is a recurring thing with him, he has a standing prescription for Doxycycline, and I have started him back on the antibiotic, with the hopes that it will take care of this recurrence before it gets a foothold. If not, he will be back in to see the vet.

Doxycycline is often prescribed in combination with a stronger antibiotic like Baytril, and many times it is not effective by itself. However, my vet likes to prescribe Doxy first for mild cases, and in Pirate's case, so far, that has been enough. I find that to be a good thing. Baytril is a strong antibiotic and very effective against myco flare-ups. But when a rat has persistent recurrences, over time, Baytril can become less effective, and eventually, respiratory infections in chronic cases become hard to treat. By using a less powerful antibiotic when it is still effective, we don't have to switch to Baytril until it is really needed, and then hopefully, it will continue to be effective longer.

Unfortunately, Doxycycline is becoming more and more difficult to find. Pirate was originally prescribed the 5 mg/ml syrup made for children. However, back in late 2012, I was unable to find a pharmacy that could acquire this medication because of "manufacturer backorder." The American Society of Health-System Pharmacists website has listed this shortage since then (most recently updated on July 10th, 2013), and the FDA had declared a shortage in January 2013, which has continued to be verified in June and July from the various manufacturers.

There are conflicting stories about why this is - some companies state a materials shortage and others claim supply and demand, but the most likely truth that no one will admit is that Doxycycline is a cheap antibiotic (or at least it was before the shortage). Drug companies approved to manufacture it have chosen to spend their resources manufacturing other, more profitable, antibiotics - forcing patients to chose a more expensive option when a more affordable one would have done just fine.

Those who are still manufacturing Doxycycline are likely making a fortune right now. Doxycycline is recommended for treatment of Lyme disease, and according to one article in March of 2013, a prescription that in the past would cost as low as $4.60 is now being reported to cost as high as $400.

So far, I have been able to get Pirate's Doxycycline from a veterinary compounding pharmacy and the price was still reasonable (about $44) the last time I refilled it. However, I am always afraid that the next time I need to refill it, it will be unavailable or ridiculously expensive. I do highly recommend having this medication compounded at a veterinary compounding pharmacy, however. They compound it in a flavoring for animals (I always choose beef oil), and my rats just love it. They often will snatch the syringe out of my hand to get the yummy medicine.

I usually give medications directly into the mouth via syringe to ensure they get all of the medication. However, Pirate's prescription has been for quite a high dose at times, and while he likes the medication, he doesn't like having it squirted into his mouth via syringe. Because it takes many squirts to administer the entire dose and he will fight them - sometimes turning his head as I squirt, causing me to spill the meds, I instead offer this medication mixed with a meat-based baby food. He likes both the medication and the baby food, so he eats it all without a fuss.

Doxycycline should not be mixed with dairy products, however, as the calcium in dairy can reduce the absorption of the antibiotic. The general recommendation is not to give foods with calcium within 2 hours (before or after) administering the antibiotic. This means that you should not mix doxycycline with yogurt or it will not be as effective.

Also, while some drugs remain effective long after their expiration date, Doxycycline is not a drug that can be safely taken when expired. The drug degrades with time and becomes nephrotic, meaning that it can cause kidney damage in humans. Thus, don't save your old doxycycline after it has expired - get a new prescription when needed.
Posted by Ratropolis at 9:05 AM