After cleaning the cage, I returned later to find Pirate using Bela as a pillow. I guess this is literally a "pillow pet." 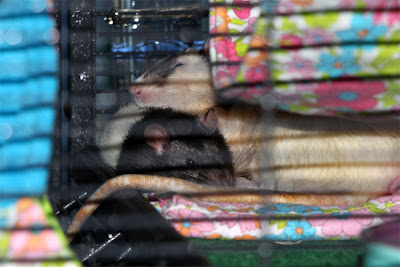 And then later, I found him snuggled up with Jo: 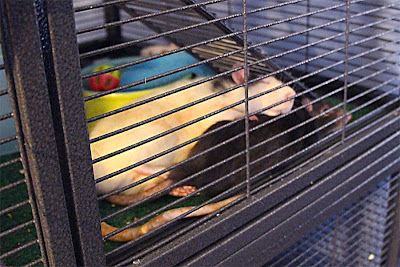 So I guess I can say that introductions have gone well and Pirate and the new girls have all formed a well-bonded group. In fact, Pirate has kind of come into a second youth, more energetic and enthusiastic than he had been since he and Loki had to be separated. It appears he is trying to fit in with this active group of excitable young ladies.﻿

But introductions can be stressful, and we had our share of scuffles and ruffled fur and frightened eeps along the way. Fortunately, none of the rats are biters and there was never any blood spilled. I was a little worried because Pirate is so much bigger than the girls and I wasn't sure how receptive he would be to other rats after his problems with Loki, but things turned out well. I was also a little worried the other way around because the girls are so assertive and Pirate is so naturally timid - but he stood his ground - defending his territory and his manhood without getting aggressive or violent.

And since introductions are fresh in my mind, here is a reminder of the steps involved when introducing new rats to the resident rats. You shouldn't just throw everyone together or you could see territorial struggles that quickly escalate and get out of hand. Take your time with each step; they can take several days before getting them right. If things go wrong, go back a step and slow down a little.