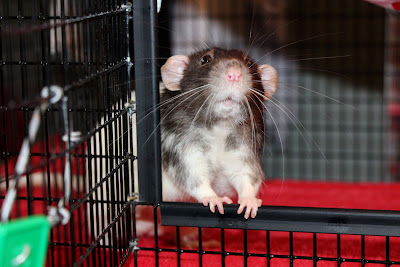 It is always difficult for me to write these posts. Memorials always come up short of describing the rat we lost.

Burt was a very special boy. He was a great people rat and he really enjoyed life. He was a fighter, not letting his cancer get the better of him for most of the time he was ill. Even when he injured a leg and it became infected because of the steroid, he still sought to make the most of every day, despite his impaired mobility. 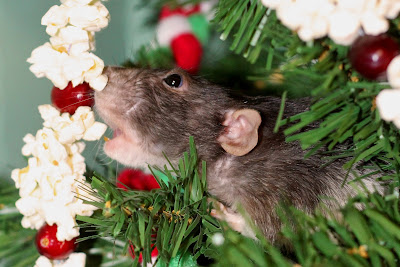 He took beautiful pictures - you could always see the smile in his face. He was happy to be here and happy to have rattie and people friends around him. He loved food and was a master hoarder. I always knew that when he refused his favorite foods, it would be time to let him go.
﻿
Last Friday was that time. He wasn't eating and he was having difficulty just existing. His head bobbed up and down with every breath. I could tell he was miserable. He had experienced a bad spell earlier in the week, but he bounced back somewhat for a few days. When I saw him on Friday morning, I knew it was time to let him go peacefully. We had him put to sleep at our vets office at 11am on Saturday, July 17th.

Rest in Peace, Sweet Boy Burt. Play hard at the bridge. Your girls Bela, Ruby, and Jo are all waiting for you to join them, along with your first buddy from your original home, Ernie. You are truly missed.

Posted by Ratropolis at 8:52 AM No comments:

By nature, I am skeptical of supplements. There is not enough regulation and a whole lot of unsubstantiated claims. Those supplements that claim to cure everything seem to be the most likely to do nothing. However, in cases where I have experienced problems, when there is a supplement that has been shown to provide some benefit, I have not been adverse to giving it a try.

The biggest problems I see in my rats are cancers/tumors. I have had many rats die from such problems (pituitary tumors, lung tumors, internal abdominal tumors, and now Burt's lymphoma). Even when respiratory infections have been bad, there has often been an underlying lung tumor contributing to the problem. If there is anything I can do to prevent that, or at least to extend the lives of these rats, it is worth researching.

That study and anecdotal evidence from rat owners who have used Turkey Tail Mushroom with positive results have led me to conclude that it is worth giving it a try. For now, I am using it with Burt. Burt's lymphoma is pretty well established, so I don't expect it to cure him, but it is my hope it may extend his life. From what I have read, you cannot overdose on this supplement and there are no known adverse effects, so it won't likely hurt.

The product I chose to use is the one used in the study: Host Defense Turkey Tail. There are cheaper products out there, but when I choose this product, I know I am using the same product that was studied. The article I linked to mentioned that you want to make sure to use mushrooms that are US grown and US-certified organic, which this product is. Mushrooms are greatly affected by metals and organisms in the environment, so using foreign grown mushrooms or mushrooms not grown organically can carry risks. (I have no affiliation with this company and again chose it because it was the product studied by the NIH and because it meets the above criteria).

I have been using it with Burt since he was diagnosed in April. I have also been given him steroids, so there is no way to determine if any benefit I see is from the steroid or the Turkey Tail Mushroom. I started out by giving him half a capsule a day (I open the capsule and mix the powder inside with baby food (turkey and sweet potato) or other foods that I think might blend well with mushroom (eg, spaghetti). I increased that amount to one capsule a day when I saw that he liked the taste of the supplement and that it did him no harm (although some days I mix it in food that he shares with his two cagemates, so he only gets 1/3 the capsule on those days).

I would like to say that Burt's tumor is shrinking and that he is getting better on the supplement, but that is just not true and would be too much to hope for. His tumor has grown slowly to the point where it is quite large and I am starting to see his body undulate with his breathing - a common sign of cancer in my previous rats. So the cancer is clearly progressing. However, in the three months since his diagnosis, the lymphoma has not visibly spread to any other area of the body (he has no new lumps - although it may be spreading to internal organs - but the vet says his lungs are still clear and sound good). He is also eating well and has a positive uplifting attitude (ie, he is not acting like a sick rat). His eyes are bright and he interacts with us as normal.

A couple of weeks ago, Burt injured his right rear leg (the leg opposite the thigh with the lymphoma). Because of the steroid, his immune system is weak and the injury became infected. An abscess developed and the leg swelled up and was not useable. The vet drained the abscess and we gave his foot Epsom salt soaks while putting him on an antibiotic. His spirits diminished for a while, as he could barely move with one leg limited in mobility from the tumor and the other limited because of injury. I thought for sure that this setback would extinguish the fight in him and he would kind of give up, stop eating, and let the cancer take over.

That did not happen. His leg did not heal perfectly and mobility is still limited, but the infection was treated, and as he regained some of his mobility, his spirits returned to normal. You can see from his 4th of July pictures that even though he does have cancer, he does not acknowledge it. He continues to live his life as much like a healthy rat as possible.


I have no illusions, though. While his tumor continues to grow, his spine is getting sharper (I can feel it through his skin) and his overall weight is gradually diminishing as the tumor steals his nutrients. The writing is on the wall and Turkey Tail Mushroom is not going to cure him. But I do believe the possibility is there that the supplement is helping his immune system to fight and give him quality of life in these last days/weeks/months.

I don't see Turkey Tail Mushroom as being the cure to cancer. But I do have hope that it may help prevent or delay these problems in healthy rats. I intend to start adding it to the food (in smaller dosages - perhaps one capsule shared among all the rats each day) on a regular basis to the diets of the healthy rats. If it really does help the immune system fight cancer, it may help prevent the cancer from developing - or if it develops, postpone the start of that development so that they live longer. I don't have any personal evidence to say that it will do this, but given the number of rats who have died too young (two years seems to be a common age to start seeing these problems - 1 and 1/2 years for PT), it certainly wouldn't hurt to try it and see if my rats start living longer or if the rate at which I see cancer/tumors develop goes down any.
Posted by Ratropolis at 10:57 AM 1 comment: 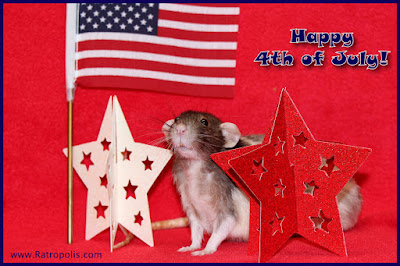 Burt was our model for the 4th of July photo shoot this year. He is doing really well despite his lymphoma (and also an injury he sustained to his right rear leg opposite the tumor). His breathing is visible, a sign that the cancer is progressing, but his appetite is good and his spirits are bright and he just can't resist hamming it up for the camera. I love to photograph Burt - he always seems to have a smile on his face. Some of the other shots:﻿ 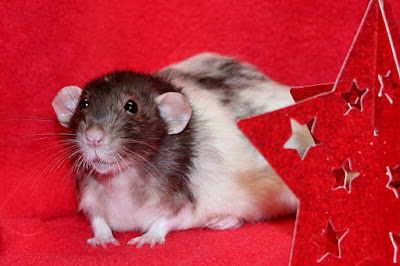 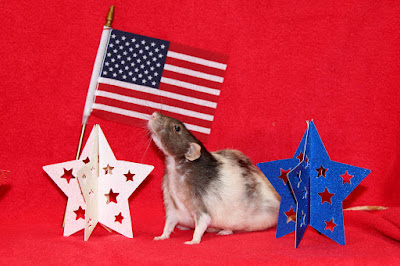 Lilly was also up for some 4th of July pictures. She did marvelously well - a lot more outgoing than our first photo shoot attempt at Valentine's Day. 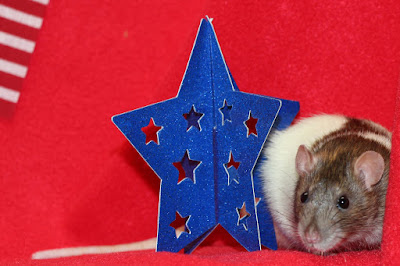 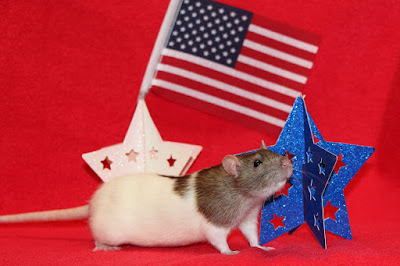 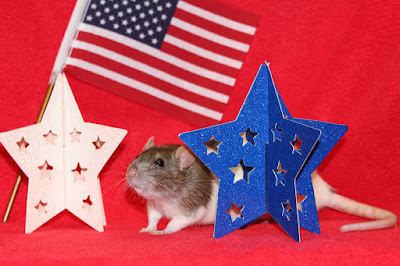 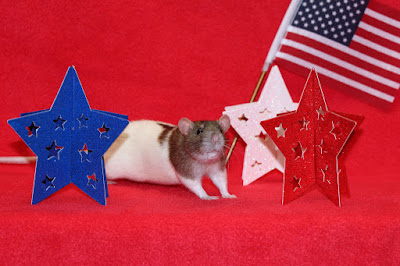 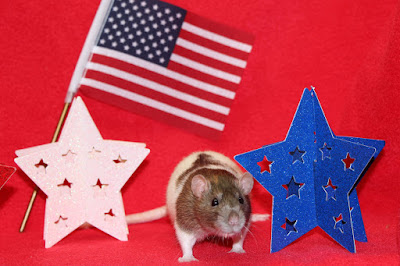